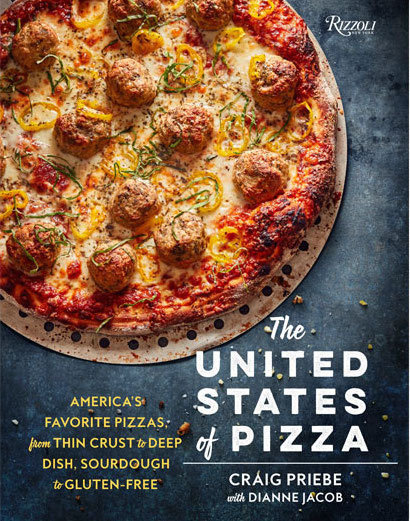 I had my 15 minutes of fame in December, when The New York Times, The Chicago Tribune and NPR included the cookbook I co-wrote with chef Craig Priebe, The United States of Pizza, in their 2015 holiday round-ups of best books or cookbooks of the year.

It was a giddy time because, as you know, a cookbook review in The New York Times is the Holy Grail. Emails flew as my agent and publisher discussed whether to put stickers on the cover, wondered if the sales reps knew, and questioned whether they published enough books for the holidays without running out.

Something about writing a “cookbook review” nagged at me, though.

Mostly, the writers did not make the recipes. I think only two writers made at least one recipe each, but I’m only certain of one. The New York Times writer said the eggplant and egg pizza was “shamelessly good,” so she must have made it. T. Susan Chang wrote on NPR that “…they work,” but I need more clues.

So if you’re writing a cookbook review for a publication or website, how many recipes does the editor expect you to make? If I ruled the universe, I’d say three at least, to get a proper sense of what the author wants to achieve. Testing three recipes means if two work or if they don’t work, you have a majority and a conclusion. But if you’re writing a round-up story listing 10 cookbooks, probably no editor will pay for testing 30 recipes, let alone for the groceries. And what writer wants to put in that much time for one piece anyway? Alas, many of our “reviews” were not part of extensive round-ups, and still, no recipe testing occurred.

In the coverage, the writers said the cookbook was a great idea, it looks gorgeous, and they listed what the content covers. Take, for an example, this bit from the Chicago Tribune:

“Dough-making techniques. Baking tools. Recipes for dozens of picture-perfect pies. Sounds like a lot of pizza cookbooks, right? What separates this one from the pack: Each pizza is plucked from a restaurant in the U.S., with a paragraph telling its story — at once satisfying our innate love for familiarity (“I’ve been to Beau Jo’s in Denver!”) and discovery (say, a renowned pizza place in the middle of a tiny ranching town in Wyoming). The authors also pull particularly interesting recipes, with chapters on sourdough pizzas, corn flour pizzas and more.”

It’s nice, right? Don’t get me wrong. I’m pleased. I content myself with the notion, a la Oscar Wilde, that “…there is only one thing in the world worse than being talked about, and that is not being talked about.”A review is not the same as the annual cookbook awards of IACP and James Beard, where judges must test the recipes of the finalists. And most people who buy cookbooks don’t make more than a few of the recipes anyway. But still, no testing bugs me.

My last point: publishing rewritten press releases can backfire. Christine Gilbert wrote as much in her post, The Worst Mexican Cookbook in the World, exposing how the media extolled what she found to be an inferior cookbook. Just a few writers, it seems, are still willing to put in the time.

What do you think? Should cookbook write-ups always require testing, or is it not worthwhile because editors don’t pay for the time involved? Are little blurbs sufficient? If you review cookbooks on your blog, do you test the recipes?

A version of this post first appeared in my quarterly newsletter, which is filled with terrific links about food writing and best practices. I hope you’ll sign up!