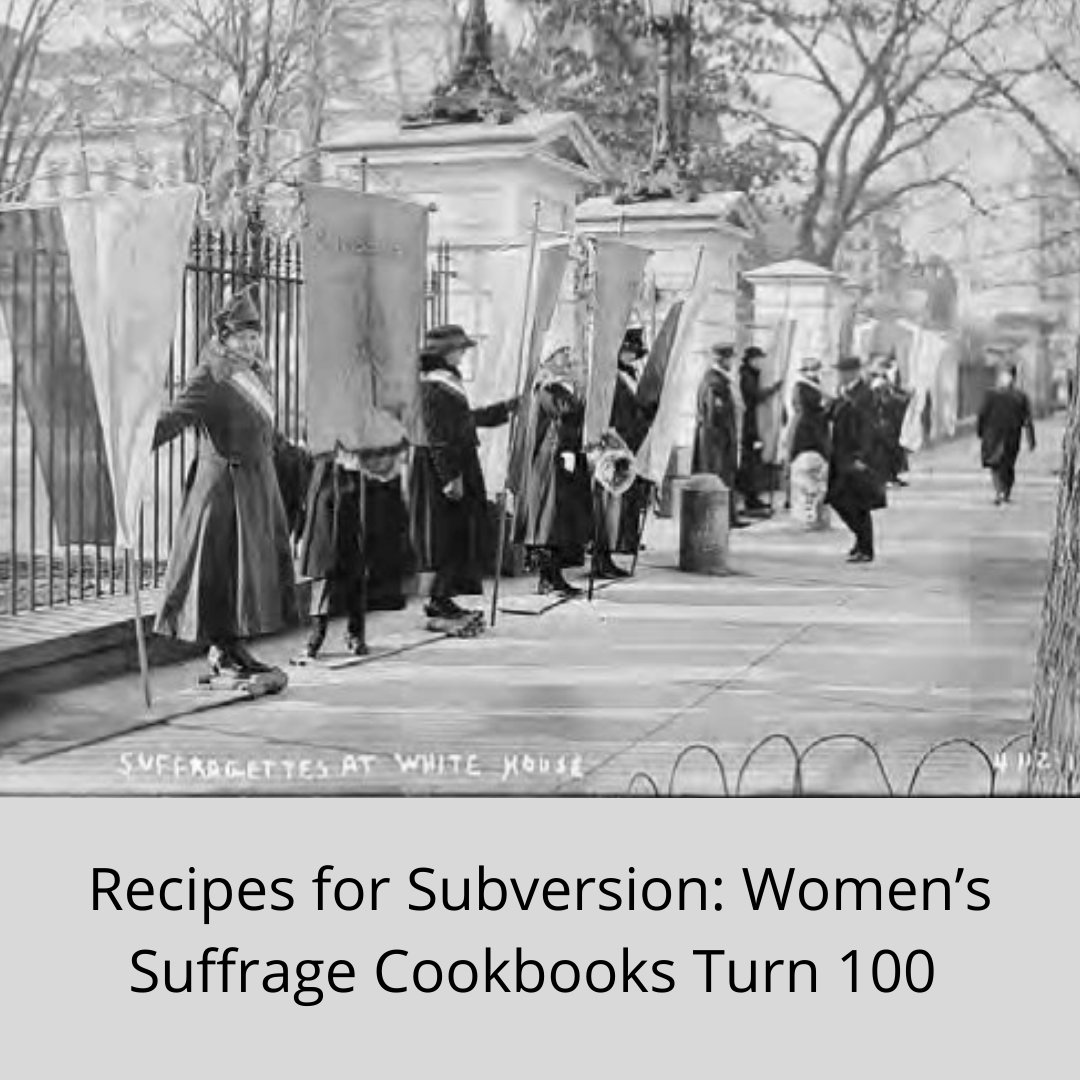 While these demonstrations are well documented, there were other, more subversive ways to spread their message: women’s suffrage cookbooks. These cookbooks were compilations of recipes submitted by women devoted to the cause and published by suffrage organizations. Cookbooks were a resourceful way to convey their argument, share information with other suffragettes, and help fund the movement.

Community cookbooks first emerged during the U.S. Civil War. They reflected life within a community, through both the recipes and other tips scattered throughout their pages. Typically, they provided advice about recipes, household tips and child rearing. Suffrage community cookbooks provided these suggestions. But they had another agenda too: getting women the right to vote.

Women’s suffrage cookbooks were perhaps one of the earliest media formats to realize the power of food as a marketing tool. Between 1886 and 1915, suffragettes used appealing cuisine to endorse the idea of women’s voting rights.  They also wanted to win over those who did not see suffrage as a valid cause. According to Laura Kumin, author of All Stirred Up: Suffrage Cookbooks, Food, and the Battle for Women’s Right to Vote, “we’ll never know how many suffrage cookbooks there were, we only know of those that have survived – fewer than 10 today.”

Here’s more about the significance of women’s suffrage cookbooks and what they achieved:

1. They provided ways to exchange ideas and unite women.

Suffrage cookbooks were a uniting factor and a way to exchange ideas. They helped women rally together. But it was a subtle evolution. In The Woman Suffrage Cook Book (1886), Hattie A. Burr sandwiched period dishes such as Graham muffins, mock turtle soup, tomato pickle and Charlotte Russe between information about the movement. Recipe contributors featured prominent women’s rights leaders. There were also teachers, lecturers, physicians, ministers and authors. They sent the message that women could be creative, intellectual free thinkers. Five pages of quotes on “eminent opinions on women’s suffrage,” from Plato to Harriet Beecher Stowe, appeared at the end.

By the 20th century, women’s suffrage cookbooks became more brazen. A bold quote, strategically placed above the recipe for savory Brown Soup Stock in the Washington Women’s Cook Book (1909) explains: “The man who neglects to vote shows small interest in the welfare of his country and is not a good citizen. What shall we say of the patriotism of the woman who would not vote if she could?” 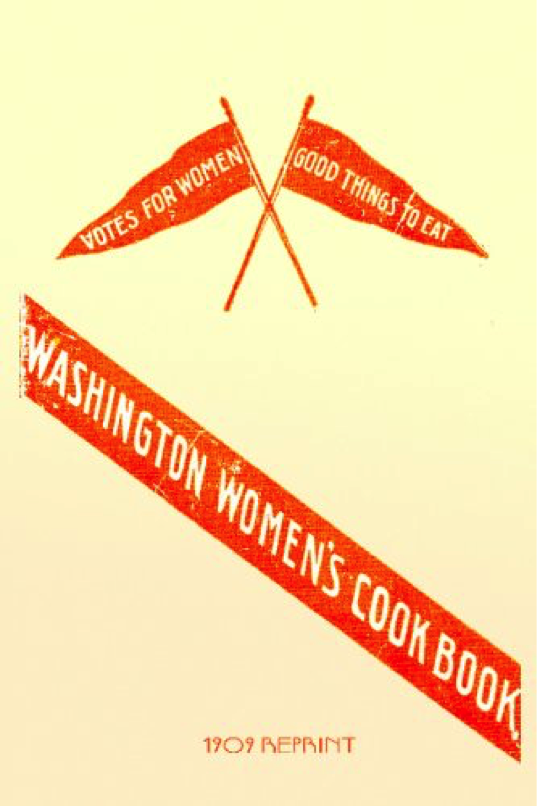 A collection of traditional and novel recipes punctuated with quotes supporting women’s right to vote, the Washington Women’s Cook Book (1909) was compiled by Linda Deziah Jennings and published by The Washington Equal Suffrage Association.

2. But there was little participation from diverse women.

While not suffrage-themed, the closest connection is The Federation Cook Book (1910), a collection of recipes contributed by black women from California. It includes an introductory poem by Katherine D. Tillman, chairwoman of the National Association of Colored Women’s Clubs. The clubs formed in 1896. Its focus was on suffrage and ending racist policies and attacks.

Even though many black women were active in the suffrage movement, it wasn’t until the Voting Rights Act in 1965 when black women (and men) gained full voting rights. This legislation finally guaranteed Native Americans the right to vote. Asian Americans did not gain full access to citizenship and voting rights until 1952.

3. Recipes were practical but also innovative.

These cookbooks not only focused on providing wholesome, healthful dishes, but were innovative as well. An example is the Rhubarb Toast submitted by Alice Stockham M.D. in The Woman Suffrage Cook Book. She calls it “an excellent breakfast dish.” It was more time consuming than today’s trendy avocado toast. The recipe calls for stewing 2 pounds of rhubarb with sugar and water before spreading it on hot buttered graham toast. Stockman further specified, “Never use white bread for toast, when bread of unbolted or entire wheat flour can be had.” 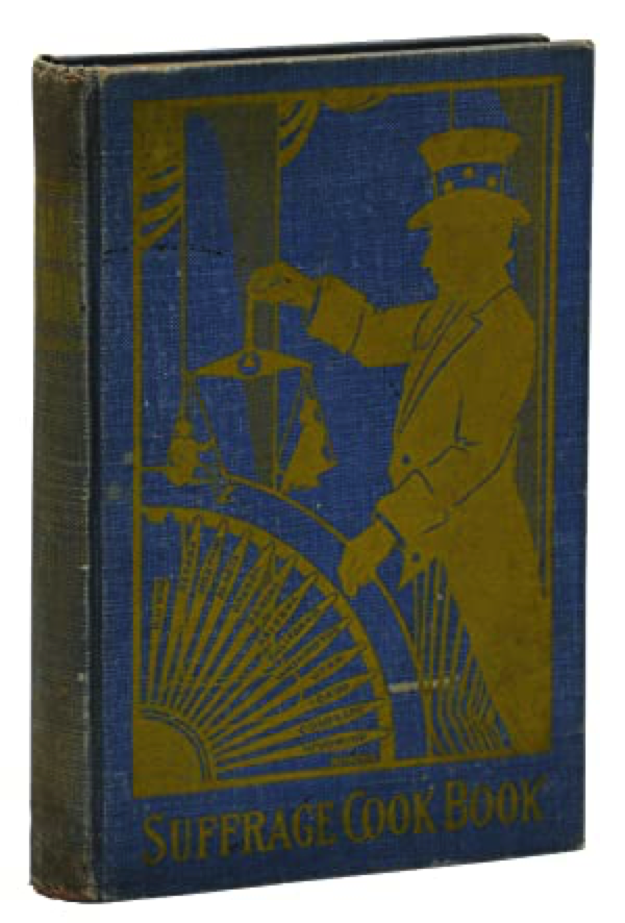 Compiled by Mrs. L.O. Kleber and published by The Equal Franchise Federation of Western Pennsylvania, The Suffrage Cook Book (1915) featured a cover showing Uncle Sam weighing men and women on his scales.

The Suffrage Cook Book (1915) discussed the now-popular vegan concept of using nuts as a meat substitute, both for cost savings and nutritive value. There were recipes such as Nut Roast, Nut Scrapple and Nut Turkey (predating Tofurky by 65 years!). There’s even an inventive use for Grape-Nuts cereal (introduced less than 10 years prior) in the Washington Women’s Cook Book. It was Grape-Nuts Broth, with directions to soak the cereal in warm milk, to make the hard nuggets more palatable.

4. Women coded messages into the recipes.

Suffrage cookbooks featured cuisine that reflected an era of American cookery such as salmon croquettes and pepper pot (which calls for knuckle of veal and four pounds of honeycomb tripe).

But there were also satirical recipes, such as Pie for a Suffragist’s Doubting Husband, which lists just one ingredient: 1 qt. milk human kindness, followed by eight reasons why: War, white slavery, child labor, 8,000,000 working women, bad roads, poisonous water and impure food. The directions state to “mix the crust with tact and velvet gloves, using no sarcasm, especially with the upper crust.”

There’s a recipe for Scripture Cake. It matches real ingredients such as butter, flour, sugar, raisins and figs to books of the Bible, with directions to “follow Solomon’s advice for making good boys, and you will have a good cake.”

The success of suffrage cookbooks proved that women could have an active domestic role and do meaningful work outside the home. This often meant pooling their resources. As noted in The Rider University Women’s Suffrage Centennial Cookbook, early suffrage leaders Elizabeth Cady Stanton and Susan B. Anthony worked together to spread their message. “With seven children, Stanton juggled her responsibilities … she wrote speeches that Anthony would go out and deliver, while Anthony helped her at home.”

The women’s suffrage cookbooks gave women more avenues and exposure. According to culinary archivist Jan Longone, they were sold at fairs, bazaars and women’s exchanges. This not only raised funds for the suffrage movement, but also helping women network and gain new skills in the fields of publishing, advertising and sales.

Today women continue to balance a seemingly endless series of tasks. But thanks to the determined suffragettes who spread the word through many different forums, including cookbooks, women are now able to share their voice and opinion through the vote.

Food writer, librarian and research historian Becky Libourel Diamond is the author of  The Thousand Dollar Dinner and Mrs. Goodfellow: The Story of America’s First Cooking School. She recently contributed to The Rider University Women’s Suffrage Centennial Cookbook, a community cookbook dedicated to the vote, with proceeds helping fund scholarship assistance for women students attending Rider. Her current projects include a book about the history of processed food, and a Delmonico’s-themed entertainment cookbook with fellow epicurean Max Tucci.