When I decided to write and photograph my first book, Man’oushé: Inside the Street Corner Lebanese Bakery, I had no experience in writing books or taking professional food and location photos to document my journey. I come from a kitchen background. My cooking career started in the 1980s in a family-owned restaurant in Fort, Lauderdale, Florida, called Kebabs & Things.

Serving and cooking for customers was an important experience in my life. Years later, I would go on to train in restaurants in Beirut, Lebanon, where I moved a few years later. Now, I am the author of five cookbooks, many of which have won awards. 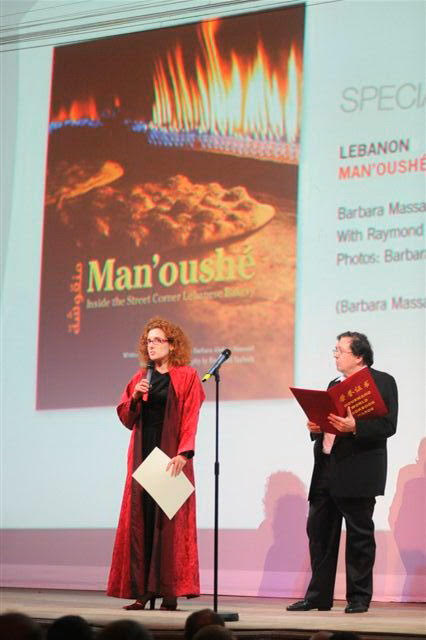 Accepting my award for Man’oushé, my first cookbook, from the Gourmand World Cookbook Awards in 2015. I did both the writing and the photography.

Here are my insights on how to write award-winning cookbooks:

1. Don’t ever let anyone undermine your dreams.

The idea to write about food started with an obsession: living through a journey in Italy and learning about pizza-making. Upon deep reflection, I took a END_OF_DOCUMENT_TOKEN_TO_BE_REPLACED We’ve forgotten about the 1960s cookbook The Compleat I Hate to Cook Book and Peg Bracken’s voice,  which is a shame. This book sold more than 3 million copies, and now you can now buy it used for as little as $2.50.

And I recommend you do so, immediately.

If you wonder what differentiates you from every other food writer or blogger in the universe, the answer is waiting for you in this cheeky, chatty cookbook that women bought in droves. It’s Peg Bracken’s voice.

END_OF_DOCUMENT_TOKEN_TO_BE_REPLACED Andy Schloss makes a 6-figure income as food writer despite the fact that he spends no time on social media.

Andy Schloss does. His business income has stayed steady for the last 30 years, hovering around $100,000 annually. He also thinks of his career in business terms, not as someone who works for fun, where income is secondary.

The bottom line: Andy has stayed on top financially because he shifts his food writing work as the market changes.

I had the opportunity to learn from Andy as part of a podcast panel on food writing and money. Andy moderated the panel for the Symposium for Professional Food Writers. A former chef and newspaper columnist, he is also the author of two dozen cookbooks. Plus he’s a END_OF_DOCUMENT_TOKEN_TO_BE_REPLACED Ever tried a mac and cheese pizza? It’s fantastic! If you have the correct recipe. Ouch. (Photo by Jeff Kauck)

An email arrived about an error. It was the kind all cookbook authors all dread. Someone was making the Mac and Cheese Pizza recipe in the cookbook I co-wrote, The United States of Pizza. But something was wrong.

Here’s the recipe error the writer pointed out: Is this how you think of your target reader?

Some food writers tell me indignantly, “I’m not dumbing down a recipe!” They think it’s insulting to to simplify their three-layer cake recipe or a lasagna with 20 steps.

They think their readers should want to cook exactly the way they do.

Your readers are not you. They don’t have your skills. They don’t cook as much.  They don’t want to END_OF_DOCUMENT_TOKEN_TO_BE_REPLACED There are so many recipes online, but books present readers with END_OF_DOCUMENT_TOKEN_TO_BE_REPLACED Rux Martin in her kitchen with some of the books she’s edited. (Photo by Barry Estabrook.)

I met cookbook editor Rux Martin years ago, before she got an imprint in her own name. Now she is Editorial Director of Rux Martin Books at Houghton Mifflin Harcourt.

She specializes in cookbooks, narrative nonfiction on food, and diet books. She has worked with Dorie Greenspan, Mollie Katzen, Jacques Pépin, and Ruth Reichl, to name just a few, and has edited New York Times bestsellers including The Gourmet Cookbook; Hello, Cupcake!; END_OF_DOCUMENT_TOKEN_TO_BE_REPLACED