Like many freelance writers, I lost work when the pandemic hit. My articles were cancelled or postponed. A magazine that I contributed to regularly went out of business. There was so much uncertainty. I felt useless. But today, it’s different. I feel inspired and empowered. I’ve put myself on a path to help struggling restaurants. This focus has become one of the most satisfying projects I have ever undertaken as a writer.

It started when I saw award-winning cookbook author Grace Young’s Instagram challenge in conjunction with the James Beard Foundation, called #SaveChineseRestaurants. Given the dismal picture of scores of Chinese restaurants closing, especially mom and pop spots, Young asked followers to post a picture of their favorite Chinese restaurant, using that hashtag.

I found a photo of dim sum from February 2020 at Peony Seafood Restaurant in Oakland Chinatown, and posted it on Instagram. But I didn’t think just posting the photo would help much. After I checked online and saw that Peony offered takeout, I went to pick up my order. How cavernous and empty the once bustling 10,000 square foot restaurant looked! I wanted to write about Peony’s plight. 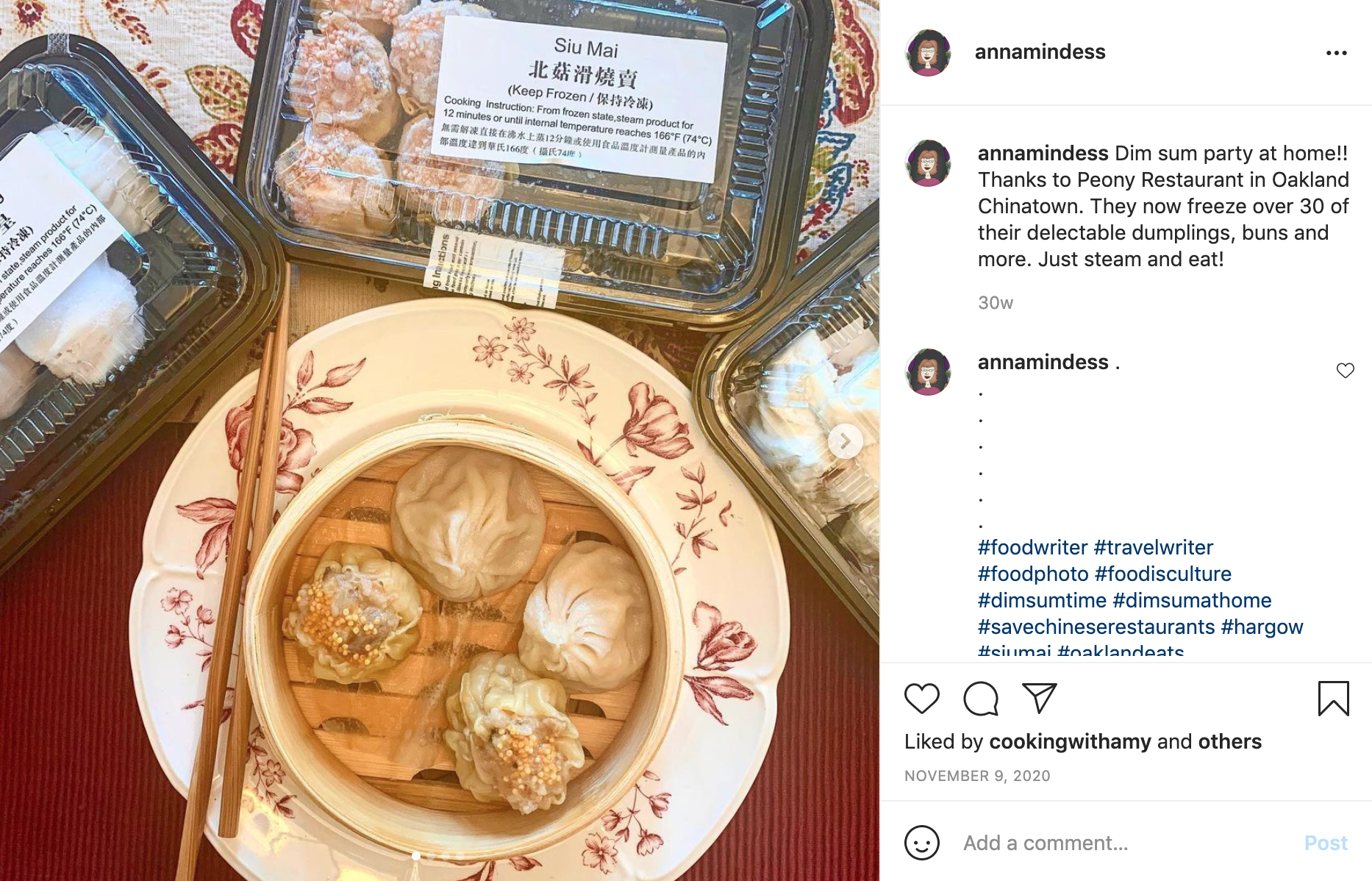 Since I didn’t know if the owner would speak to me about what appeared to be a dire situation, I asked my friend Lisa Li to contact the owner. She could interpret for us if he agreed to meet. We met with manager Ming Zhu. He said Peony might only survive two or three months.

In November 2020, I wrote a feature article about Peony Restaurant for Oaklandside. It included quotes from Grace Young. Because of Peony’s role as the cultural center of Oakland Chinatown, the article resonated with many former diners. It spread widely through social media. The next week, Peony was up to 100 take-out orders a day. The manager hired back three chefs. In March, Peony reopened. Zhu credited the article for making that possible.

A lovely acknowledgement by Grace Young, who leads the charge on saving Chinese restaurants and Chinatowns across the U.S.

The success of that article made me realize the impact our words as food writers can have in these difficult times. It led me to seek out other opportunities to make a difference. It was not hard to find more struggling restaurants. I wrote for Berkeleyside about La Crepe a Moi, a new French creperie near UC Berkeley. Its planned opening date was set for mid-March 2020, just as all the college students left town. The restaurant got 200 new customers the week after the article came out.

Berkeleyside’s editor suggested I write about another new spot, Syma’s Persian and Mexican Restaurant. Its immigrant owner, who had escaped from Iran to Pakistan on foot, was not going to let a mere pandemic stop her plans to expand her restaurant. She also got an influx of new customers. Many asked for the pistachio baklava and ash soup pictured in my article.

In conjunction with AAPI (Asian-American and Pacific Islander) month, I wrote for KQED about the resilience of two legacy restaurants in San Francisco Japantown. This time I didn’t need an interpreter. Two leaders in the Japanese American community acted as liaisons and introduced me to the owners.

In May, Grace Young told me about a Chinese restaurant near me called Creek House Dim Sum. She asked if I could check out the story behind the septuagenarian couple who came out of retirement to open a labor-intensive dim sum restaurant. I found a sweet tale of a family working together to make dim sum the old-fashioned way: by hand.

Here’s how to write to help struggling restaurants:

If you wrote about local restaurants and chefs before, check back to see how they are doing.

Check in with restaurants that opened in the last year. They didn’t have the luxury of an established following that would support a switch to takeout.

3. Focus on Chinese and AAPI restaurants.

Grace Young says that nationwide, a huge percentage of Chinese and AAPI restaurants have closed. Given the double whammy of the pandemic plus recent violence against AAPI community, they and other Asian restaurants probably need a boost.

If the restaurant owners speak a language that you don’t, get someone to interpret for your interview. You are much more likely to get the full story, especially if it includes uncomfortable facts about their financial losses. If you don’t have the funds to pay a professional interpreter, reach out to your network for a contact who speaks the language.

5. Establish trust with a liaison.

Even if the restaurant owners speak English, if they don’t know you, they may not immediately trust you. This is especially true if you ask sensitive questions. If you can get a community or cultural liaison to introduce you, that may help to reassure them.

6. Write for a local outlet.

To maximize potential customers for these struggling restaurants, write for a local outlet. This is not the time for exposure in a national publication. The point is to attract local customers who can patronize the restaurant. Pitch a local newspaper, or maybe a free paper that gets delivered weekly.

7. Strategize how else to reach the community.

Location-based blogs are a natural solution. Some neighborhood associations have online or paper newsletters. Or perhaps a local school’s website? Even a Facebook post may let your local friends know about neighborhood spots that need their support. And people seem eager to share concrete ways that they can make a difference.

I write regularly for websites based in Berkeley, Oakland, and San Francisco. Residents of these cities are famously food-focused and often eager to help their neighbors. There are many other ways that food writers contribute to their communities and the world. (See Dianne’s post on Food Bloggers who Help Others). In my case, this endeavor has given me a new purpose that I don’t think will fade away soon.

Anna Mindess is an award-winning writer focusing on food, culture, travel, and immigrants’ stories. Her work has appeared in The Los Angeles Times, The Washington Post, AFAR, Fodor’s, Lonely Planet and other publications.  She is also an American Sign Language interpreter. Follow her visual take on the world on Instagram @annamindess.
(Photo courtesy of Shen Liu on Unsplash.)
Share this...