Do you dream of your cookbook reaching audiences around the world? Priming your cookbook or food narrative for translation will make it more desirable to publishers abroad. A successful cookbook translation depends on the publisher and translator. But you can help.

If you’re a make-it-happen person, you could be proactive and send a translation proposal to selected foreign publishers, perhaps by adapting your existing book proposal. Hire a specialized translator to prepare a sample in the new language.

Sometimes a foreign publisher contacts an author directly. If so, offer to help with the promotion and to answer vital questions the translator may have.

When collaborating with your book’s translator, ensure that a translation resonates as well abroad as it does at home. For this guest post, I’ve used examples from the American cookbooks I own and cook from. I’ve laid out how your book might change and why. Because if you won’t be able to read or understand the translated book, you might never know!

What if you have strong language skills and want to translate your book yourself? Chances are, you won’t be able to do so. Publishers often use translators they’ve used before. Your main advantage as translator would be your culinary knowledge. If you’re really serious about it, consider whether you:

Here are my tips for a successful cookbook translation:

1. A title that rocks in the US doesn’t necessarily translate abroad.

A Table in Venice (Skye McAlpine) should sail smoothly. Culture- or country- based titles such as Comfort Food (Jamie Oliver) or Cannelle et Vanille (Aran Goyoaga) might need explaining or adapting. If your blog lands you a cookbook deal, your blog name won’t have the same impact abroad. This explains how La Tartine Gourmande (Béatrice Peltre) became Frais et Festif [Fresh and Festive] in French.

The concept of “comfort food” is familiar to Brits and Americans, not really to Spaniards. Oliver and his editors explained it in the book’s introduction and back cover. That way they could leave the title in English in the Spanish translation. Yet, as a consequence, some Amazon customers bought the book in the wrong language.

2. Pan sizes aren’t the same in other countries.

In her recipe for a frangipane plum tart, Goyoaga (Cannelle et Vanille) uses her pastry chef knowledge to teach readers about 3-2-1 ingredient ratios for pie dough so they can adapt to different pie dishes. This is useful information for readers, and for a foreign translation.

Peltre (La Tartine Gourmande) bakes her molten cakes in individual ramekins. She explains how, depending on the baking time, the cakes will be more or less gooey. If readers use a different size of dish, the same advice applies.

3. Include metric measurements in the method.

Even authors who are kind enough to include metric measurement conversions in their lists of ingredients sometimes forget them in the instructions. Here’s an example of how to include both: “Roll out the pie dough to ½ inch thick [1.3 cm].”

4. The ingredients list may not include all the prep.

In American cookbooks, writers list ingredients in the order readers use them.  They include preparation steps such as, “a clove of garlic, minced.” This is not that common in European cookbooks.

I’m Spanish and love how the ordered list and prep steps help me get organised and find my next ingredient quickly.

Catering to all audiences is hard and leads to longer texts. But it helps your readers and translators.  Savvy cookbook translators will identify which ingredients need substituting and how to do it. They might feel uncomfortable meddling with your recipe, however. Or the publisher may not allow it. If you provide the substitutions for key ingredients, it makes our work easier.

For her apple and pear verrines, Peltre uses Macoun apples and Forelle pears. She simplifies the former as sweet baking apples in the ingredients list and gives Bosc as an alternative for Forelle pears. Explain the rationale for your main ingredients (colour, flavor, taste, texture). You’ll help cooks and translators find alternatives.

7. Can readers find those herbs and spices abroad?

Frequent complaints among cookbook users are the amount, expense, and accessibility of spices. Some authors include a useful list of shops, which translators can adapt to local target audiences. 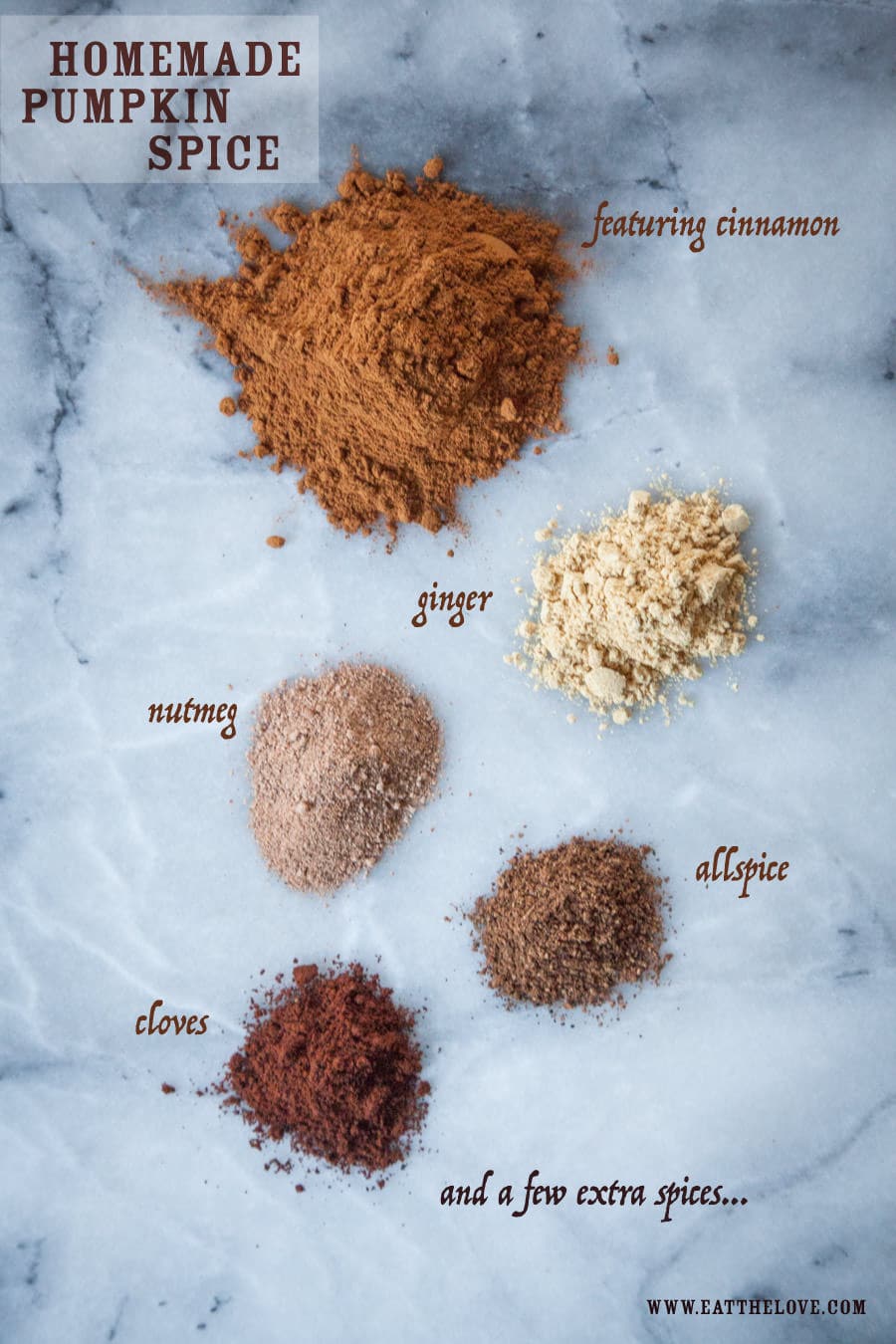 Develop your own spice mix rather than referring to a premade one, such as Pumpking Spice. Other countries probably don’t know it. (Photo courtesy of EatTheLove.com)

Others provide sub-recipes for spice mixes. For example, in Falastin, Tamimi and Wigley provide a sub-recipe for “Baharat samak” [fish spice mix] alongside their “Spiced Za’atar Squid with Tomato Salsa” recipe.

You could also place a sub recipe in a Basic Recipes chapter at the start of your book. Cooks will no longer need to hunt the shops for exotic ingredients, and the translator will just translate the sub-recipe.

Meat cuts differ across the world and fish can be regional. For example, for the “Crispy Snapper with Root Veggie Mash” in Cannelle et Vanille, Goyoaga gives rockfish as an alternative. But neither snapper nor rockfish are widely available in British supermarkets. Seabream would have been a more international substitute, but hard to find in U.S. markets.

So explain why you’re using a specific fish or cut of meat and, if proposing a substitute, the difference it will make. Will it be fattier or flakier or meatier? Will it take longer to cook?

9. Explain cooking techniques you might not think need explaining.

I was surprised to find a bain-marie among the basic cooking techniques in La Tartine Gourmande and to read how to test a boiled potato for doneness in Cannelle et Vanille. But newer cooks, and those who come from a culture where these aren’t typical methods, might be grateful.

Also, texts translated from English into wordier languages (hello Spanish!), will expand considerably. Create a chapter introducing basic techniques such as “cream eggs and sugar,” as that will save you words eventually.

Evocative descriptions are great to connect with readers, but perceptions of color, texture and taste, as well as the metaphors you use to describe them, stem from things you know. For example, you’ll find quince paste described as butane (gas bottle) colour in a Spanish recipe, but it will be called rosy, deep ruby or deep orange in English. British cookbook author Nigel Slater compares a quince paste’s texture to Turkish delight, a product less familiar in Spain than in the UK. Expect good translators to adapt some metaphors.

So what’s the solution? Must you write more?

Yes. Experienced cookbook writers Nigel Slater and Nigella Lawson discuss in their recent books the issue of catering to all cooks and to diet trends, but they do a very good job of it. As a result, their books are long.

Like Slater and Lawson, the best cookbook writers have an individual style. They are excellent teachers. If you want inspiration from authors used to living between two cultures, read Regula Ysewijn, who self-translates from English to Dutch. In her book Oats in the North, Wheat from the South (named The British Baking Book in the US), she does a brilliant job of discussing flour protein content, and cream and milk fat content in different countries in the ingredients chapter. She explains how to make your own ingredients, such as self-rising flour or suet. She is good at explaining how baking ingredients work.

In Cannelle et Vanille Bakes Simple (2021), Goyoaga aptly explains why she uses each flour and offers alternatives for most, if not all, as well as lots of ideas for replacing eggs.

So if you’d like to have your book sold in many countries, I hope my words have inspired you to write in a more comprehensive way, for a successful cookbook translation.

Pili Rodríguez Deus is an English-to-Spanish culinary translator. She holds an MA with distinction in Translation from the University of Portsmouth (UK), where her research focused on cookbook translation, including the translation of part of an American cookbook. She has completed courses in culinary and wine translation, the history of recipe books, and cookbook styling. She’s a member of the British Institute of Translation and Interpreting, the Institute of Linguists, and Mediterranean Editors and Translators. She also holds a postgraduate certificate in post-compulsory education and taught Spanish for 20 years. You can find her on LinkedIn, Twitter, Instagram and on her website.