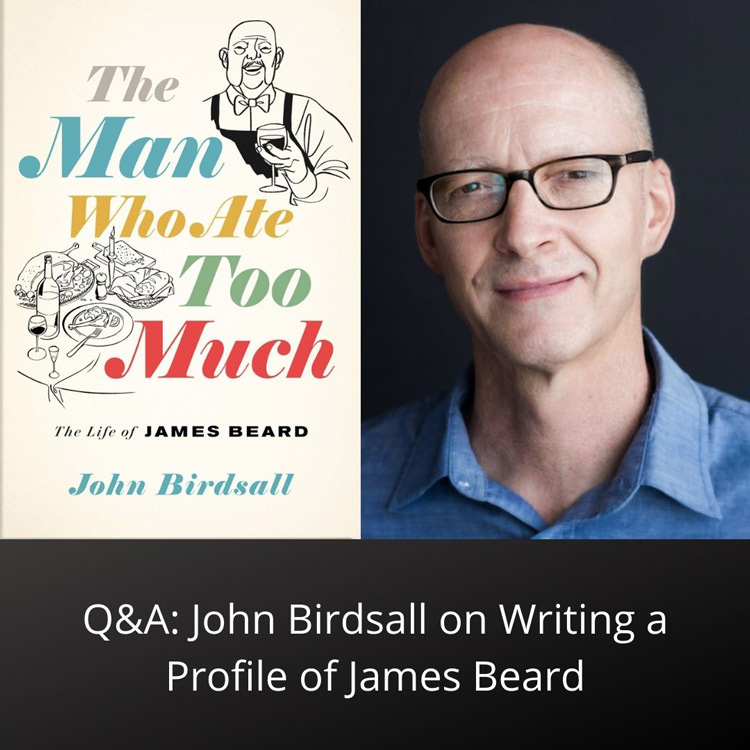 Recently I had the pleasure of reading The Man Who Ate Too Much, by John Birdsall, a two-time James Beard Award-winning author and a writer I’ve admired since his early days as a critic. John combined scholarly research with the skills of a novelist to create this nuanced portrait of the famous cookbook author and personality. I wanted to find out about his process and methods of writing a profile about James Beard, especially since profiles are rare in the food world. Here is our interview:

Q. Why did you want to write a profile of James Beard?

A. When I was a chef, back in the late 1980s, I cooked at a restaurant in San Francisco with a focus on regional American cooking. I became familiar with Beard’s 1972 masterpiece, James Beard’s American Cookery. That book has a particular language—the recipes, the sketches, the way it’s designed. It intrigued me.

Later, in 2013, I wrote an essay for Lucky Peach magazine titled “America, Your Food Is So Gay,” about the influence on American cooking of three closeted cookbook authors of the mid- to late-20th century: Richard Olney, Craig Claiborne, and Beard. That piece had a big impact—I won a James Beard Award for it, and many readers, chefs and others, reached out.

Beard lingered in my imagination for a few years. He seemed the most interesting of the three, someone who was a household name for over three decades in the 20th century, yet who had to obfuscate. He rewrote his story, hid behind an image, and created myths about himself to conceal his homosexuality. I was fascinated to learn how that could possibly be.

Q. How long did it take to research and write this book?

A. It took ten months to write the proposal for the book—most of 2016. I did some research for the proposal (I sort of arrogantly thought I’d done a lot), but, as it turned out, I’d only scratched the surface. My agents and I sold my book to W.W. Norton in early 2017 (the legendary editor Maria Guarnaschelli, who recently passed away, acquired it). Research and writing took pretty much every working minute of my life for the next three years. 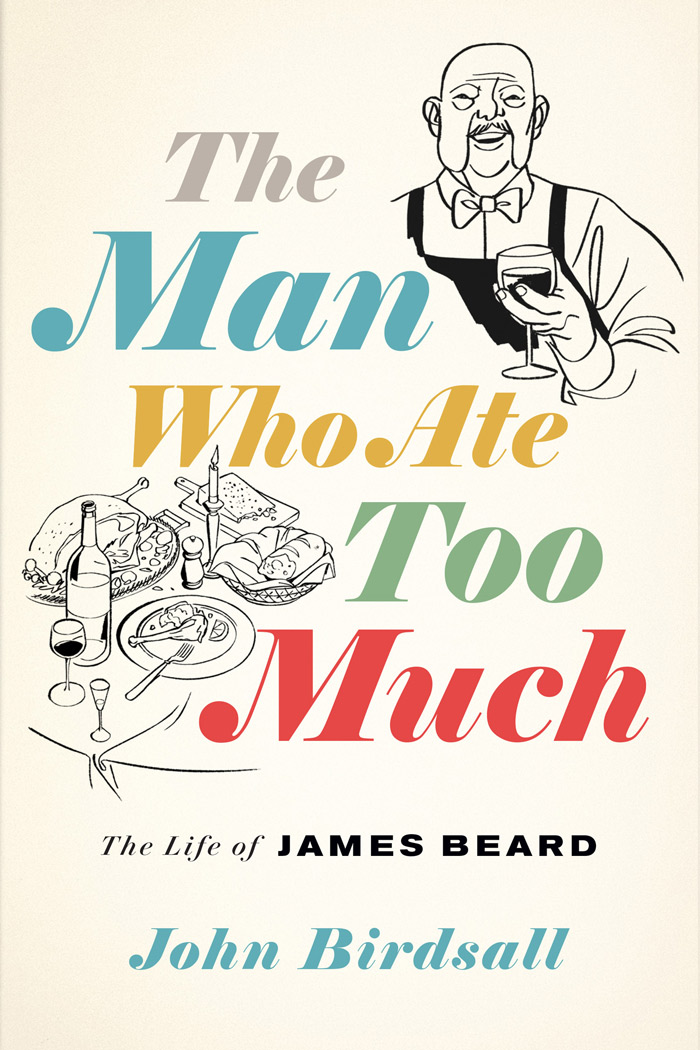 While dozens of food memoirs exist, few food writers have attempted a book-length profile. Perhaps it’s because of the amount of research and complexity involved.

I wrote three major drafts—not just minor revisions from draft to draft but some pretty intricate reworking. I was so naive when I began, thinking I’d take a year purely devoted to research, and spend another year writing. It was nearly as clean as that: I was feverishly doing research until the last draft was nailed down (actually, it continued after that!). A biography is a beast of a thing to take on, and James Beard had a very full, very intricate life.

Q. Was it more fun to do the research than to write?

A. I was so consumed with the research. It’s addictive. Each piece of it comes with multiple threads leading to other pieces, with multiple threads leading to yet more pieces. You definitely need a good editor to step in and let you know when you’re getting sidetracked, following something that might be interesting but that isn’t central to the book. It’s so easy to lose perspective.

And writing about a closeted subject has loads of other challenges. Beard erased lots of clues about his life. He and his friends destroyed letters deemed “incriminating;” that is, that revealed his sexuality or too much about his private life. So there was an added layer of detective work.

Actually, it felt like archeology: finding shards and traces of information and digging to find more. Sometimes it took intuition: having a feeling that I’d find something down some avenue. My most successful intuitive find was at the ONE archives at USC. They have papers relating to the early years of the Mattachine Society, one of the first gay rights organizations in the US. I had a hunch that Beard would have a connection to Mattachine activists. I made a special trip to LA and spent a day in the archives. In the last box of letters I found something: A letter from a friend of Beard’s, ordering a gift subscription of the organization’s magazine in 1957. Definitely a high point of the whole project.

But for every success, there were a bunch of dead ends. Writing, by contrast, felt much surer: an act of hunkering down in my office.

Q. What was the easiest part?

A. There’s no easy part! That’s sort of a joke, but not really. I mean, writing a biography, something that has a long life, that will shape the public’s understanding of the subject for decades to come, is a huge responsibility. At times I felt paralyzed by it. In a weird way I felt Beard’s ghost as a very present companion through all if it. I felt that I was able to share in his emotions, at times in his life’s story, to feel his triumphs and deep sorrows.

At the same time, people who end up being my sources of information—people who knew Beard—often had their own ideas about the biography I should be writing. The thing is, though, they didn’t have all of the information. They knew Beard in a certain way at a particular time.

Being a biographer means you must keep to your convictions about your subject, writing the story of a life as you understand it, with all of the information before you. There’s a saying about writing a biography: “Shoot the widow,” meaning don’t let anyone tell you how to write about your subject, even sources who were very close to them. It’s important to stay clear of anyone’s agenda about your subject, and especially, as in Beard’s case, if there was a sort of conspiracy among those who knew him to keep his private life a secret.

Q. How did you learn to write nonfiction like a novel?

A. It felt natural for Beard’s life, which had operatic plot twists, secrets and betrayals, and soaring success and dark corners. One of his goals as a cookbook author was to write in a narrative style. But except for his 1964 book Delights and Prejudices, he was never able to do it, partly because he wasn’t a particularly skilled writer, but mostly because cookbook publishers wanted comprehensive recipe collections, like Joy of Cooking, not singular narratives with recipes. Anyway, writing in a strong narrative style seemed appropriate to Beard’s life.

I wanted food to be a major driver of the story of his life: meals he’d had that changed the course of his life, dishes he cooked as expressions of love, or longing. Focusing on food made a novelistic approach appropriate.

And, I mean, Beard was a huge character who thought, in many ways, like an actor (which he’d trained to be). I wanted the tone of my bio to swing as far from academic as possible, which is why I included really copious endnotes. In a way, it’s two biographies: the main narrative and the documentation in the notes.

A. My editor at Norton, Melanie Tortorolli, was such a pleasure to work with. She inherited my book after Maria Guarnaschelli retired, as I mentioned earlier. And as I got into the research, my manuscript had a slightly different emphasis than the one in my original proposal. But Melanie was amazing, acknowledging the shift but giving me her blessing to take the book where it needed to go.

Q. Beard borrowed recipes from other writers and published them as his own. Today’s food writers “adapt” recipes all the time. Why was this approach frowned upon?

A. Yes, lots of cookbook authors plagiarized others, or (which is still common, if not universal) tweaked existing recipes, sometimes only slightly, “adapting” them to make them their own. Publishing standards were looser when James Beard wrote his first cookbooks in the early 1940s. It wasn’t until the mid-1950s that a major American publishing house, Doubleday, had a full-time editor dedicated to cookbooks, so many editors wouldn’t necessarily have known if an author committed plagiarism. 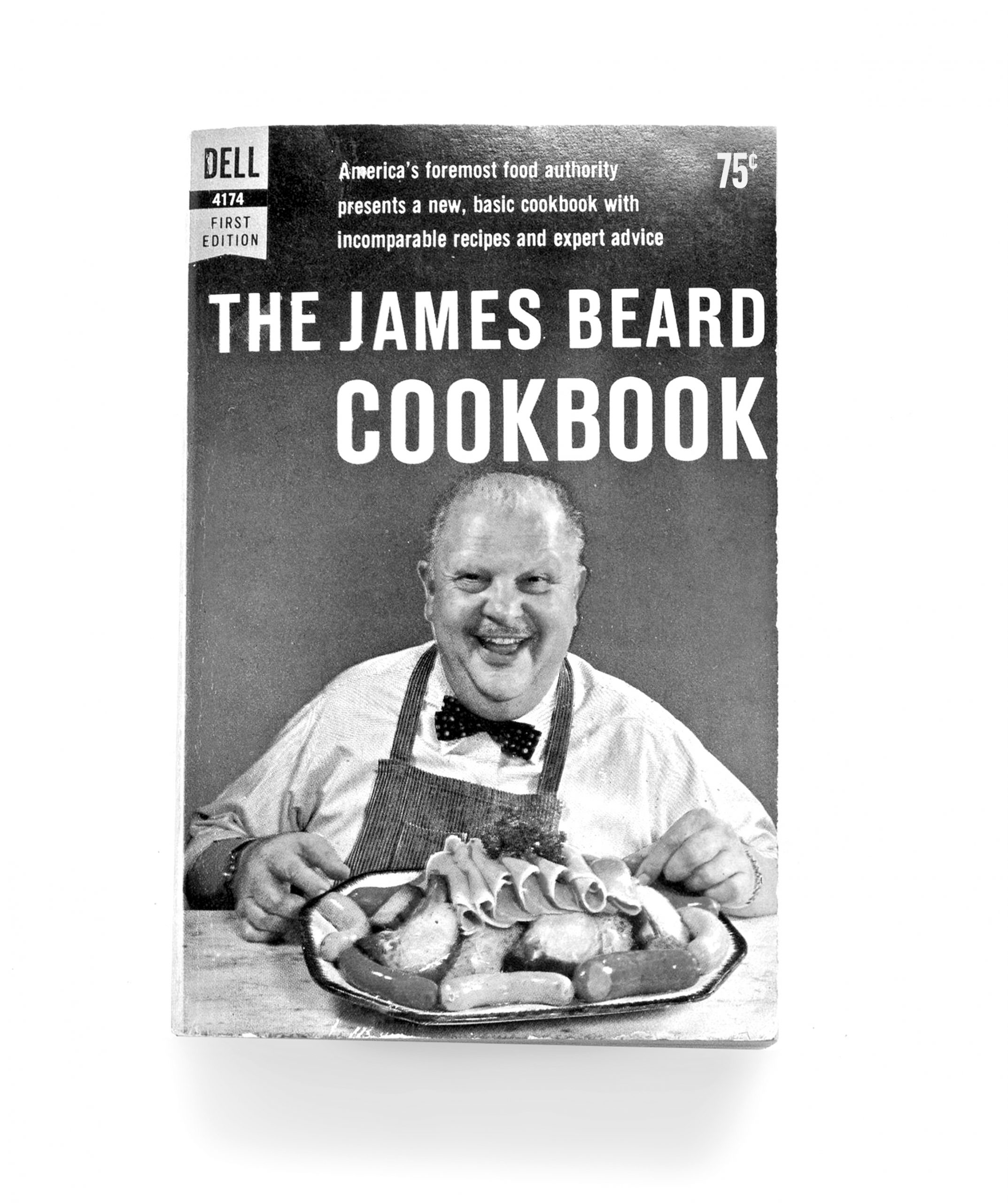 Published in 1959, this cookbook was the first American book to begin life as a paperback. According to Beard’s friend and editor, John Ferrone, it has been Beard’s bestseller.

Overall, there was a huge lack of transparency in cookbooks. Most Americans cooked recipes from huge comprehensive books, like the Betty Crocker Picture Cookbook or the Better Homes and Gardens Cookbook, even Joy of Cooking and Fannie Farmer, consistently among the best-selling cookbooks of the twentieth century. These were written by teams of editors and recipe testers who were “home economists” and rarely, if ever, named.

What made Beard’s plagiarizing disappointing was that he portrayed himself as an author. Indeed, the appeal of his books was that he was a man of singular tastes and experience, and that you were buying his personality, as much as anything, his authorial knowledge. But yeah, cookbooks have a terrible history of transparency. The great editor Judith Jones of Knopf made sure Irene Sax, Beard’s ghostwriter for his last book, Beard on Pasta, stayed a ghost. Jones didn’t even invite Sax to the book’s launch party. “And everybody in food in New York,” Sax told me, “was invited to that party.”

Q. What would you say to writers who might want to approach a complicated subject?

A. Complexity is truth. We’re all deeply complex, flawed individuals who live surrounded by nuance and contradictions. Writing successful profiles, especially of people in food, especially at this moment when food media is facing a reckoning about the past, calls for complexity. Even for a subject you’re excited about, someone you believe has made incredible contributions, don’t shy away from including discordant notes. It’ll ground your writing, and make your subject even more convincing.

And all of us who write, whatever our subjects or our field, we have an obligation to keep a certain distance from our subjects, to cultivate the skills of a critic, and to take a rounded, deeply considered approach to what we’re writing about. James Beard had serious character flaws, but they make his positive achievements seem even more impressive, and serve as a reminder that humanity is complicated.