We chose a photo of the Meringue-Topped Rice Pudding with Apples because it is visually striking and filled the cover space. I named the book Isolation Baking because that was the name of my Twitter project that led to the book, and it was familiar to people. The subtitle “Recipes from my (post) confinement kitchen” signaled that the cookbook wasn’t limited to the period of Covid confinement.

My first e-cookbook came about by accident. And so did giving it away for free. Nevertheless, my free e-cookbook has been a big success and led to some other positive events.

Here’s the backstory: As the world went into lockdown I began sharing recipes on Twitter under the hashtag #IsolationBaking. After panic-shopping, people found themselves with lots of ingredients they didn’t know what to do with, and lots of meals to cook.

They were also looking for a distraction. Social media had become a lifeline for human contact. I started thinking about what I had to offer this huge community now hanging out online.

The answer was recipes. I wanted to reconnect with my food community and reassert myself as a food writer anyway. I had spent more and more time posting on Twitter about American politics.

After two solid weeks of posting close to 30 recipes on #IsolationBaking, people asked me to gather the recipes and post them on a platform that made them more accessible. It would also be less confusing than following a recipe broken up among a series of tweets.

My husband suggested I put them into an e-cookbook. This recipe-sharing project became

Here’s what I learned about creating a free e-cookbook:

1. An isolation cookbook has to come out fast,  before the end of confinement.

How do you do something fast when you’ve never done it before? Fortunately for me, my husband Jean-Pierre worked in publishing, both as an editor and a publisher, for 15 years. He loves projects like this. He’s been pushing me to create an e-cookbook for years.

So he did all the work of choosing a platform and helping me with glitches. His first choice was Lulu, and his second was Apple’s iBooks, which gives two options: ePub and iBooks. EPub allows distribution on a wide variety of platforms, like Lulu does, but both the layout and the interface were bad.

We went with iBooks. But not before we spent lots of time figuring it out. As Jean-Pierre said,  “Anyone can create, publish, and share a nice pdf, but once you want something more elaborate, there are not a lot of sites that do it. The problem with each platform is that you only discover the limits and features little by little, after you sign up and get further and further into the process.

“Our main problem was a tax problem (U.S. versus France). The second was that many platforms offer only an unattractive book layout with limited features. We ended up on iBooks because we could create a beautiful, high quality book. We also liked the ease of uploading photos and recipes and manipulating and adjusting the layout.”

Apple’s iBooks made it easy to publish quickly. Its stock cookbook format is beautiful, the finished product user-friendly and the design is striking. It was simple enough for a novice like me.

The other reason I could move quickly was because I already had the recipes. My blog, Life’s a Feast, began in 2008 and continued through January 2015, when I created a new version of my blog on an updated platform. Since then, seven years of recipes with photos have laid dormant, inaccessible to the public. Only a dozen or so made it to my new blog. I drew on this existing collection of recipes to post on Twitter and then put in the e-book. As a result, I had no recipe development to do.

Since only Mac, iPad, or iPhone users could download the e-book from Apple Books, we also shared the full Isolation Baking pdf on a Google doc that everyone could access and download.

For each recipe, I corrected typos and errors, ensured the language and layout was uniform, and verified my U.S. measures-to-metric conversions. I retested only a handful of recipes, primarily to take better photos. And as I shared recipes to Twitter, new eyes read through each recipe, calling out errors as well as testing each recipe!

Twitter was just what I needed: It was fast and interactive. Those who followed #IsolationBaking could ask questions and I could answer on the spot, and I could adapt my choice of recipes to the demand.

I worked on the cookbook mornings and afternoons for two to three weeks straight. The first week I spent wrangling platforms and layouts, and I uploaded about 90 recipes and photos in the next two weeks.

A sample chapter page. We fiddled with the code to have a different color for each chapter head page. We added an insert atop the photo with the list of recipes found within that chapter.

3. I didn’t expect to give away my book for free.

When filling out the iBooks registration forms, the question of whether to sell comes up automatically. At first we decided to sell it for €10, knowing that iBooks kept 30% for commission. Nevertheless, it was an innovative way to raise money for our business here in France. Our hotel had suffered financially during the period of confinement and lockdown.

But it was impossible to direct e-book sales into a French bank account. The American publisher demanded that the money go into my personal U.S. bank account. I didn’t want the transactions mixed up with my tax situation in the US. There was no way around it. We decided to give the book away.

We did create a PayPal account for those who wanted to donate to our hotel in exchange for the e-book. Many did, and we were delighted!

4.  It turned out better than I ever imagined.

Posting the recipes daily on Twitter created a buzz that drove enthusiasm and expectation. People shared my recipes, and new people followed me and shared the recipes as well. New followers got to know who I am, and the buzz boosted the sales of my traditionally-published cookbook Orange Appeal. 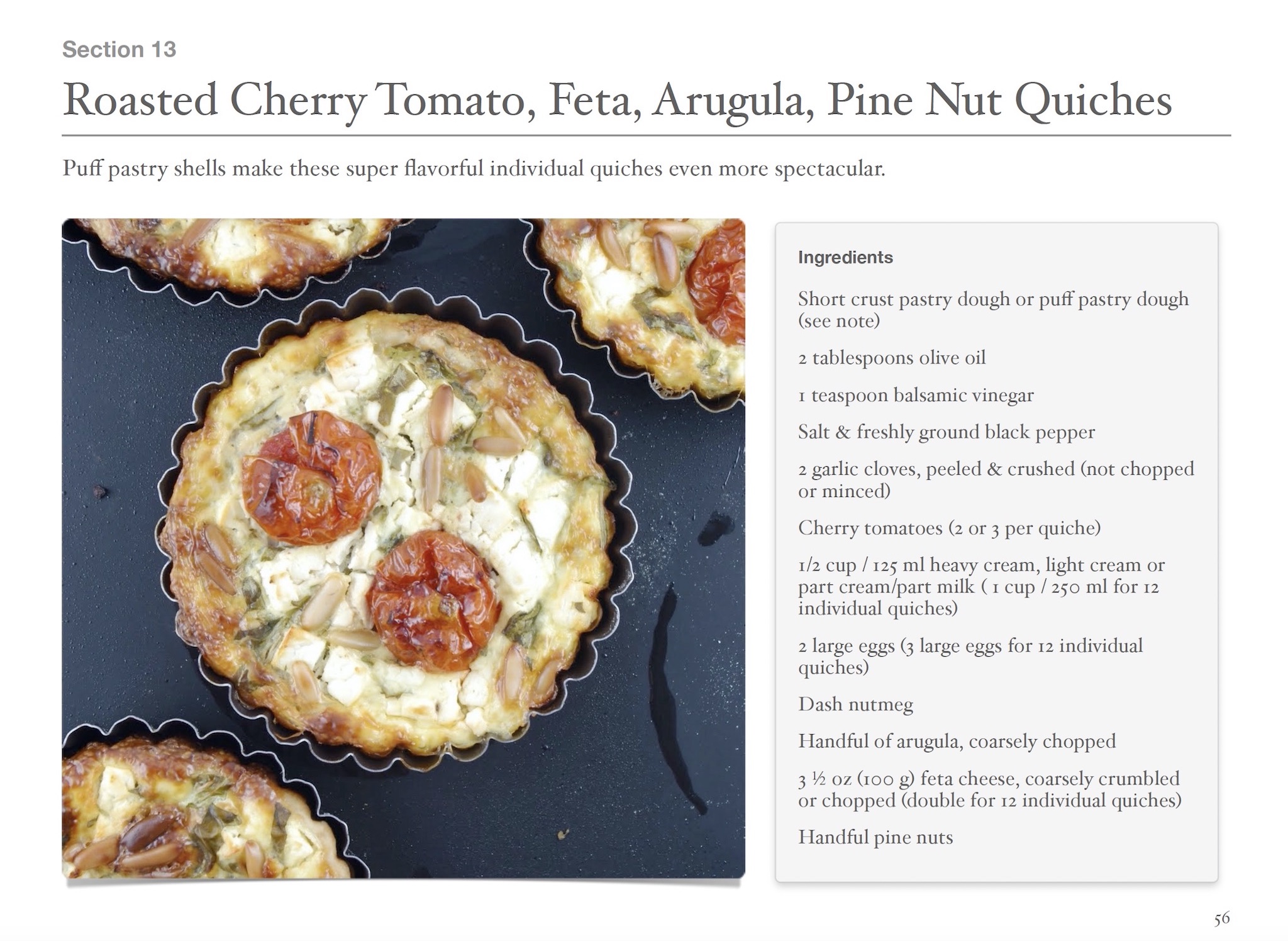 Here’s a sample recipe page. We were happy with the quality resolution of the photos.

Once I announced I would put the recipes into an e-cookbook, I had already created a fanbase by posting my recipes online. This large and growing group was happy to become part of the #IsolationBaking community. I continued to post recipes on Twitter as I put together the e-cookbook to keep interest high and growing.

A free e-cookbook guaranteed much wider readership, of course. More people downloaded and cooked from it than would have if I tried to sell it. To my surprise, though, the e-book became a fantastic promotional tool, especially as I’ve not published a book for a while. Everyone who downloaded and used this e-book became a potential purchaser of Orange Appeal and any future cookbook I might publish. To date, more than 3,000 people have downloaded Isolation Baking just from iBooks; I have no access to the number of downloads of the pdf from the Google doc, but many have downloaded it there as well.

To my surprise, my free e-cookbook helped me find and grow a new audience and following. I’ve already started working on ideas for my next two e-books.

Jamie Schler is a writer specializing in food and culture. She’s the author of Orange Appeal and the e-cookbook Isolation Baking. She lives in Chinon, France, where she and her husband own the Hôtel Diderot. You can follow her on Twitter @lifesafeast.

For more on self publishing, read these posts.