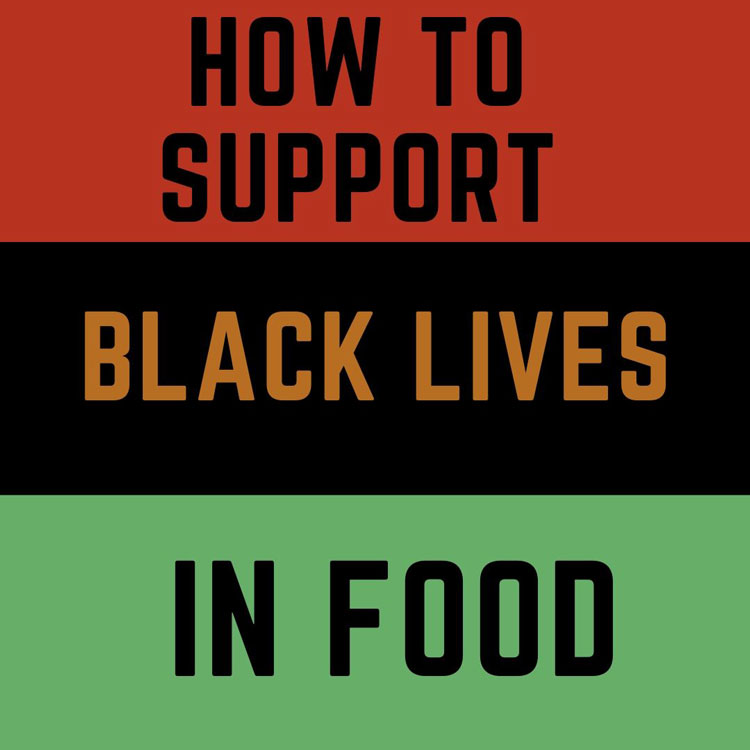 I’ve been trying to figure out my role in being someone who can create a shared future for black lives in food. It’s a future where we have racial justice and so many other forms of justice that are needed.

I’ve always maintained that if we’re ever going to get a breakthrough on race, white people need to work this out amongst themselves. Because no matter what I say or whatever other people of color or marginalized people say, it gets discounted at some level or outright dismissed by the white people who hear it.

As a start, here are three ideas for supporting Black lives in food:

When people wonder what they can do to start being an ally, I tell them to “do what you can where you are.” I borrowed this phrase from my friend Toni Tipton Martin. You go through all the things you think you can do. Then when you exhaust those, it’s time to think, “Maybe I need someone else to show me what I can do.” Raise the question out loud. Because there’s stuff that you may not have even thought about.

Second, there has to be what I call Welcome Tables (referring to the gospel song). This is where we create spaces for people of different perspectives to come and discuss really tough things. Some may completely disagree, but people need to come together, and no one has the moral high ground.

People need to feel safe actually saying what’s really on their mind. And then listen, even if there’s whack stuff coming out of the other person’s mouth. Hear them and try to understand. Just try to recognize the humanity of that person on the other side of that dialogue. If the two of you can’t come to an agreement, you have to just hold the tension that you disagree.

2. Use Food to Reconcile and Disarm.

I talk in my forthcoming book, Black Smoke, about how certain foods have negative racial stereotypes, and food actually becomes weaponized. In the late 1800s, media leaders had to build a case to undermine black rights and eventually limit them. They used food to create the idea that Black people are inferior, childlike, beast-like ― basically that they weren’t really humans, so why are they getting these rights? Barbecue was used that way ― it wasn’t just fried chicken or watermelon, it was all the same food white people ate ― but it became weaponized. To this day, I have Black friends who won’t eat fried chicken if white people are around.

I have gravitated toward food because I think food is a powerful tool for reconciling issues. When you sit down at the table with someone, you recognize their humanity, looking at cooking food as an act of love because as the cook is saying at some level, “I care about your survival.”

Food disarms people. It makes them more comfortable and creates a space to build relationships and get to know each other so that you can then go on to talk about the really tough things. We can use food in myriad ways to bring people together so we can work some of the stuff out.

People can support Black lives in food with their dollars. It sounds trivial, but if there are people in the world that you think are doing good things, support them by following them on social media and encourage other people to follow them, too. Social media is the coin of the realm these days. Amplify their voices by sharing the good stuff they’re doing.

When someone is looking for influence-makers, they’re looking at the followers. Like those of Samin Nosrat from “Salt Fat Acid Heat.” She has around half a million Instagram followers. She posted a picture of me and said “Follow Adrian Miller.” She did this for several other Black people in the food space, and it doubled my Instagram followers in two days. That’s somebody who supports and amplifies Black voices.

To be even more specific:

What I’ve found with a lot of Black food entrepreneurs is that they’re good at making food, but running a business presents challenges.

People can create opportunities for food writers by buying our products, or by inviting us for paid speaking opportunities. We need to cultivate what I call reconciliation entrepreneurs. These are creative and talented people who figure out innovative ways to bring people together.

People need to be told a story or be convinced to do something to engage. For those of us who want to see a better future for black lives in food, we have to tell stories that motivate people to join us to build that future.

Adrian Miller, aka the Soul Food Scholar, is a food historian and the author of the James Beard Foundation Award-winning book Soul Food: The Surprising Story of an American Cuisine, One Plate at a Time and The President’s Kitchen Cabinet: The Story of the African Americans Who Have Fed Our First Families, From the Washingtons to the Obamas. Follow him on Twitter at @soulfoodscholar.