You like to follow inspiring leaders and publications on social media, right? Do you know this group of Black women editors in food writing? The first three are new to their editorial positions, and the others are publishers who started their own magazines.

Food writers and editors are mostly white. We need change in our industry. The women I’ve featured here are leading the charge, speaking out on the change they want to see, and making it. They cover stories that a white-dominated media overlooks. You’ll want to add them to your social media feed — and maybe you’ll want to pitch them story ideas as well.

So join me in celebrating these Black women editors in food writing:

Dawn Davis is a former vice president at Simon & Shuster (S&S). She accepted this new position and will start on November 2. Davis will be in charge of the print and digital formats of the magazine, as well as social media and video presence. Bon Appetit has 6.5 million monthly  readers of the magazine.

While at S&S, Davis was publisher of Amistad Press, which is devoted to multicultural voices. She’s also the author of If You Can Stand the Heat: Tales from Chefs and Restaurateurs, a 1999 book featuring interviews with chefs.

So far I can’t find her on social media but I bet that will change soon.

She started her career in journalism, and was the first African-American woman to hold the position of food editor at a major daily paper, the Cleveland Plain Dealer.

At Cook’s Country magazine, she will have her hands full. The magazine has a print circulation of 280,000. The Cook’s County television show is in its 13th season on public television. Two million viewers watch it every week.

I met Toni through the International Association of Culinary Professionals (IACP), at its annual conference in Austin a few years ago. Later we talked at another IACP conference, when she was about to start work on her second book.

I’d say something about pitching a story, but I don’t think American’s Test Kitchen (the parent company) uses outside writers. Maybe that will change under Toni.

Jamila Robinson was the editorial director for Atlantic 57, the creative and consulting division of The Atlantic. She took this job as the head of the food section in January.

In addition to assigning and editing articles, she also writes. Check out Romancing the Stove, which she wrote for Food & Wine.

4. The editor of Island and Spice magazine: Rochelle Oliver

Rochelle Oliver started the quarterly magazine Island and Spice to elevate the presentation of Caribbean food. It is focused on chefs and recipes, and aimed at a global audience. Most recently she was the breaking news copy editor and digital editor at The New York Times. Follow her on Twitter @Rochelle_Oliver and Instagram: @rororoc

And if you’d like to submit a story idea to Island and Spice,  pitch editor AT islandandspice DOT com.

5. The editor and publisher of the online site Cuisine Noir: V. Sheree Williams
Cuisine Noir‘s mission is to connect the African diaspora through food, wine and travel, and to ensure the history, successes and achievements of Blacks in these industries. It debuted in October 2007. V. Sheree Williams is a content creator and consultant. Read about her on Korsha Wilson’s blog.

To pitch Cuisine Noir on a story idea, send an introductory email to request freelance guidelines at hello AT vsheree DOT com. Follow the magazine on Twitter @CuisineNoirMag  and Instagram @CuisineNoirMag. I couldn’t find social media info for Wililams herself.

6. The editor of the forthcoming For the Culture magazine: Klancy Miller 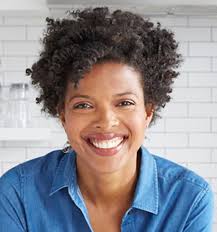 Klancy Miller, a French-trained chef who is starting For the Culture magazine.

Klancy Miller, a cookbook author, writer and pastry chef, is starting the biannual For the Culture, a magazine that celebrates Black women in food and wine and food media. It will be written, photographed and ilustrated by Black women.

Learn more about the changing face of food writing. Listen to these podcasts from Salt and Spine: